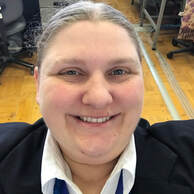 Rebecca "Sunnybrook1" Pike
⦿ Who is "Sunnybrook1"?: Why, that's me of course! My first name is Rebecca and my aunt always called me this in reference to the book/movie "Rebecca of Sunnybrook Farms". Plus my first email address included Sunnybrook1, so it's been my online nickname from the start.

I'm a level 35 problem solver who graduated from college with a BA in Musical Performance and minors in Computer Science/3D Modeling and Animation. Got certified to teach English as a Second Language, so worked in Japan as an Assistant Language Teacher (ALT) for about two and a half years. I'm back in the states now, figuring out what to do next.

⦿ HOW did you come up with this tutorial/wing-design?:
I had some spare time between classes in 2010, which was also around the time I got into the cosplay and convention scene in the Pacific Northwest. I found myself spending hours looking at other peoples costumes online as inspiration for my own and noticed that many of the costumes and characters I enjoyed had wings of some sort.

But usually the wings themselves made me cringe. Chicken-wire frames covered with fabric and feathers were stiff, unwieldy, fragile, and unattractive to me. I wanted something more, a practical wing that could bend and fold like a real birds wing, with separate, layered feathers and pose-ability. Something that shouted BIRD and not just the old fashioned "cherubim statue" style and shape, that was easy to transport and fun to wear.

So after finding dozens of images of birds on Google & staring at YouTube footage of wing movement I decided on two parts of the wing design; (a) I would imitate the main primaries of the wing by using a fan like structure, which is simple to construct and open/closes the way I wanted my wings to, and (b) the secondaries would somehow follow my arm, allowing the wing to move and bend more naturally. 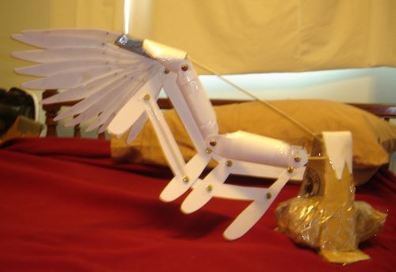 Wing Scale Model - posterboard
The image above was my first model and showed me how it might look on a larger scale. It got me excited enough to move forward, and my next question was, "What would the feathers be MADE out of?". Since the primaries were mimicking fan movement I decided that the feather shafts could act as the fan shafts, and my shaft of choice was some hanger wire I had on hand. I bought some fabric to use as the feather itself - since its' paint-able and comes in almost ANY size - and used some white gesso I had from a previous project to join all the pieces together. I figured the multiple layers would be strong enough work despite the size, much like lamination does with paper, and one test feather later I knew I was onto something! 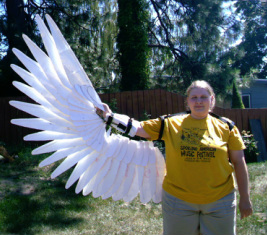 Wing prototype 1.0
Sure, my first wing was rather generic - covered with paper coverts to make sure the illusion would withstand a second layer of feathers - the arm-connector was circulation-cutting and it opened farther than a real birds wing should, but again the results I had showed promise and it was enough to keep me going to where I am (and you are) today.

⦿ Will you make ME a pair of wings?: I prefer to teach others to create than to do all the creating all on my own - maybe if I found a way to involve others in the process, who knows! Keep an eye out for announcements, or contact me if you want to be notified when I do.


⦿ Can I share this tutorial with others or change some?: You may do so - this process is experimental and always changing - but ONLY if you share alike and keep it free. This is for NON-commercial use, so no trying to charge people for it! ಠ_ಠ

More specifically I have placed it under a Creative Commons Attribution-Noncomercial-Share Alike 3.0 License, so some rights reserved.
⦿ ​I followed your tutorial! Want to see what I made?:
YES. 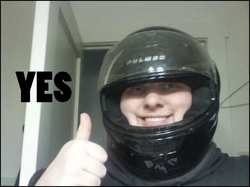 Just send me a message with "RWT Results" as the subject or fill out this Google Form I've made, you have NO idea how much I love seeing what others come up with, it is one of the main reasons I made this tutorial in the first place!

⦿ I like what you do, have some money!: I'm glad you appreciate my work enough to want to support monetarily, just click on the 'DONATE' button below, it leads to the Paypal portal (which is the safest, most common method of internet fund transfer I know of). Any amount is welcome and appreciated~
Powered by